On Christmas Day 1918, just weeks after the armistice, a Rhyl soldier wrote graffiti in the attic of Floreffe Abbey, Belgium.

Can the graffiti reveal history to us almost one hundred years later? 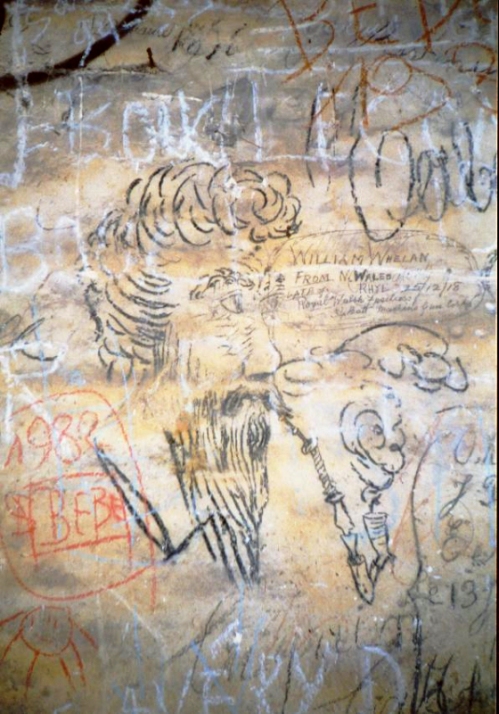 The soldier’s name, as you can see from the image, was William Whelan.  You will also be able to make out that he served with the Royal Welsh Fusiliers and Machine Gun Corps.

After an enquiry from Belgium last week we have carried out some research.  Records at Flintshire Archives show that William Whelan lived at 3, William Street, Rhyl. A census search shows that in 1911 William and his family were living at 30, Vale Road.

image by permission: Find my Past

Click on the image to discover more about William.

We think that this is William’s son (also William aka Willie) pictured in the second photograph of our previous post “Look, Duck and Vanish”

Do you know more about William Whelan?  It would be great to piece together his story and to know what he was doing in the attic of Floreffe Abbey, Belgium on Christmas Day, 1918.  Please comment below or e-mail us at rhylhistoryclub@gmail.com

Two years ago we published an article about a village called Marly in Moselle, France where five British airmen lie buried after being shot down during the second world war, in February 1944.  One of them was a Rhyl man – Tony Turner.

A Marly historian, Stéphane Cottel, is searching for more information, and especially a photograph of Sgt. Patrick Anthony “Tony” Turner. Tony was born on October 14th, 1922 at the Royal Alexandra Hospital, Rhyl.  His parents were Thomas Turner and Norah Sheila Turner nee Phillips of the Foryd Harbour Hotel.  This is what we know about Tony: 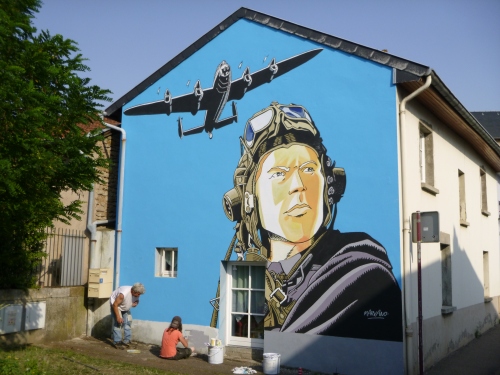 The restoration of the mural in homage to the airmen of Lancaster JB604 in Marly, Moselle, France.

Unfortunately we received no leads or more information after publishing the article.  However, recently we have discovered more information which may help.  The Turner family were originally from the Manchester area.  Tony was an only son.  His mother, Norah Sheila Turner died in tragic circumstances on July 19th, 1938.  She was discovered dead on the floor of the washhouse of her home in Crugan Avenue, Kinmel Bay by her niece, the cause of death was electrocution due to faulty/incorrectly installed wiring.  Mrs Turner was about 50 and Tony was 15.
We also now know where Tony worked before joining up, and some other details.  This is from the Rhyl Journal, July 6th, 1944:

“Killed in Action – News has been received that Sergeant Air Gunner Patrick Anthony Turner, the only son of Mr and the late Mrs Turner, Foryd Hotel, Rhyl, and who, since his mother’s death, had resided with his cousin, Mrs Owen, Ferry Hotel, Foryd, has been killed on active service.  The news is contained in a letter which Mr Edward Owen of the Ferry Hotel, has received from the War Organisation of the British Red Cross Society and Order of St. John of Jerusalem.  Sergt. “Tony” Turner, who was 21 years of age, was reported missing in February following his first operational flight over enemy territory.  Before joining up he was a bricklayer with Messrs W. H. Jones and Sons, Pen y Bont House, Abergele.
M. Cottel has photographs of four of the five brave airmen but not one of Sgt. Tony Turner.
The village of Marly never forgets.

The Military College of Science, Rhyl.

Norman Copeland O.B.E. photograph by kind permission of the Museum of Army Chaplaincy

What is so fulfilling about running this blog is not so much the information we “export” but the information we “import”, through enquiries to this website and also to our facebook page.  Items of history about our town and people, of which most of us were unaware, have been shared with us from as far afield as South Africa, Italy, France, Australia, and Canada.
Our most recent correspondence has come from the Ukraine and has revealed what to many readers will be forgotten history.  Taras Hrytsevych, a military psychologist and senior teacher in the Army Academy in Lviv, Ukraine, has written to us enquiring about the Military College of Science* which was located in Rhyl during the Second World War.  At the outbreak of the war the College was based in Woolwich, but after a brief move to Lydd in Kent it became necessary to split the college into three parts.  “A Fire Control Instruments School was established in Bury in Lancashire and an Artillery Equipments School at Stoke on Trent.  The M.T. section -and who can blame them – chose Rhyl as their home.”  (A Short History of the Royal Military College of Science, 1864-1964 by C.B. Daish) M.T. here stands for Mechanical Traction.

Norman Copeland received correspondence whilst he was here in Rhyl to 55, West Parade.  Was this part of the College itself, perhaps the administrative HQ?  Or was it the accommodation for those at the College?  During WW2 many of the buildings on West Parade were requisitioned by the Army.

55, West Parade is no longer there, it is part of a block that has recently been demolished. If anyone has any information about 55, West Parade or even better, any photographs, could you please comment below or contact us via e-mail? (rhylhistoryclub@gmail.com)  Also, if  anyone has any other memories or information about the Military College of Science in Rhyl, could they please contact us.  Thank you.

* Towards the end 0f 1941 the branch of the Military College of Science in Rhyl was renamed (reorganised) the Royal Artillery Mechanical Traction School (commonly abbreviated to R.A.M.T. School). Early in 1945 the R.A.M.T.S. was moved from Rhyl to Bordon in Hampshire, thus the time frame of the M.C.of S./R.A.M.T.S. being located in Rhyl is 1940-1945.  After D-Day (June 6th, 1944) the School abandoned requisitioned buildings in Rhyl and moved to “a neighbouring hutted camp”.

This year we have a departure from our usual research/photographs/memories concerning Rhyl and the way that the wars affected the town and its people.  We are sharing links that commemorate the casualties of war through music, more especially music from Rhyl Folk Club.  The history of Rhyl Folk club has been explored on these pages before, to read this click here .

In the clip below Rhyl musician, and Rhyl Folk Club member, Brian Bull sings one of the most poignant songs written about the First World War:  “And the Band Played Waltzing Matilda”.  It was written in 1971 by Scottish born Australian singer-songwriter Eric Bogle and describes war as futile and gruesome, while criticising those who seek to glorify it.

The next song was written and is sung by well known local musician and Rhyl Folk Club member,  Alun Rhys Jones.  Alun says “I wrote this song in utter awe and respect for those countless young men who marched off to war, often giving their lives for the benefit of us all. Complete and utter madness…! But at the time, who felt they had a choice…? I wrote the song in 1987 inspired by work of writers such as Eric Bogle and Dominic Williams. Fortunately “Lest We Forget” won the Hindley (Lancs) Folk-Club Song-Writing Competition that same year and was broadcast by BBC Radio Manchester. I’m very proud of this song and it can still move me to tears when I sing it now…. I feel it’s even more moving when sung unaccompanied, in the folk tradition, which is how I present the song from time to time”.

In the next clip Alun sings a Dominic Williams song “Tommy’s Lot”:

Walter Price Roberts of Rhyl is buried in the Giavera British Cemetery in northern Italy. The inscription that his mother chose for his headstone reads:

“May some loving hand gently place some flowers for me, his mother”

Some loving hand did just that.  Diane Gassman, who lives nearby, lays flowers on Walter’s grave and has felt compelled to find out more about Walter.  To read more about this story click here.

Last December the Daily Post published the story in an effort to find Walter’s relatives.  Walter’s nephew, Clive Jones, read the article and was overwhelmed and delighted to have been traced.

The inscription on the grave has not only brought flowers for Walter but, thanks to Diane, also brought his family to him.  Mrs Roberts chose the inscription well.

Clive and his wife Audrey travelled to Italy a couple of weeks ago.  Diane and her family gave them a wonderful welcome and they visited Walter’s grave together.  Thanks to everyone involved in this heart warming story.

Clive has shared some photographs of his visit with us: 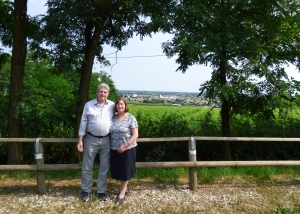 In October 1914 it was reported in the press that Rhyl had been elected as the training ground for the “North Wales Comrades Battalion” of Kitchener’s Army.

On October 5th the Liverpool Daily Post reported that “Batches of recruits are arriving in town daily, and they are compactly billeted on the lodging housekeepers of the west end, while they turn out on the promenade for drilling.  Their instructor is Sergeant Major F.C. Ruscoe, an ex-colour-sergeant-instructor of Volunteers and an old Army man, who was the first to be involved in the new Battalion.”

On the 20th the Liverpool Echo said “It is reported in Rhyl that Colonel Dunn is relinquishing the command of the North Wales Comrades Brigade, and will proceed to Aldershot, his place being taken by Colonel Wynne Edwards of Denbigh, who formerly commanded the Denbighshire Battalion of the Royal Welsh Fusiliers (Territorials) establishing a record for the number of men attending a Territorial Camp.  Colonel Wynne Edwards has lately been in command of the German prisoners at Queensferry.”

The Liverpool Daily Post on the 26th described how well the training was going, it said that the Comrades Brigade “is putting in plenty of hard work and route marches have been indulged in. Colonel Wynne Edwards is in command, and recruits are steadily coming forward and every effort is being made to bring the brigade up to full strength.”

Here is another powerful, precious and sad old photograph  – it is perhaps as well that none pictured here could have possibly imagined what lay ahead.

Questions: are the “North Wales ‘Pals’ attached to the Royal Welsh Fusiliers” the same as the “North Wales Comrades Battalion”.  Are they separate entities or did just the name change?  And of course, many more questions; this blogger has no expertise as far as military history is concerned so please comment below if you can add to our understanding. 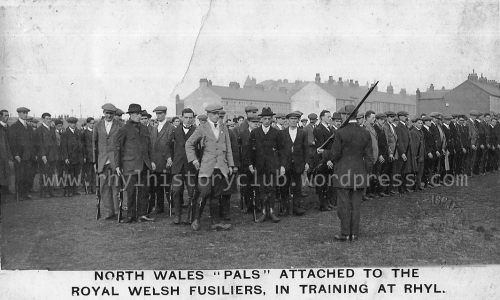 Many thanks to Lynne Maxwell for sharing these photographs with us.  Lynne comments that in the top photograph is her great grandfather Joseph Williams with his son Joseph Wilson Williams.  Also her Taid, John Ellis Williams and uncle David Williams.