I’m sure many people will have “walking pictures” in their family album – walking picture cameramen were busy in Rhyl from the 1930’s to the 1960’s.
“Go Home on a Postcard – The Story of Walking Pictures” is a wonderful website with lots of information and examples from across the U.K.  Simon, its creator, has kindly contributed this interesting article:
“I always wondered who in the family used to run ahead of us in the street to take our photograph!”  So wrote one lady after finding a website called Go Home On A Postcard, devoted to the forgotten art of the Walking Picture.  The answer was simple, none of them did.  Instead commercial photographers lurked on street corners from Edinburgh to Eastbourne, snapping people walking towards them, and then showing them a kiosk where they could buy a souvenir print later in the day to take home, or post back to a friend.
And it was a booming trade, especially in the 1930s and again after WW2, only fading away as shops began to offer fast turn around on customers own films in the 1960s, and people began to holiday more abroad.

Rhyl, being a popular resort town, drew many people on day trips and short holidays, so was always going to attract walking picture cameramen. The earliest examples I have seen are from 1930 on Wellington Road (above), and 1933, of a father and daughter emerging onto on West Parade from John Street (below). The camera operators are not identified but while many street photographers remain anonymous, others have come to light. 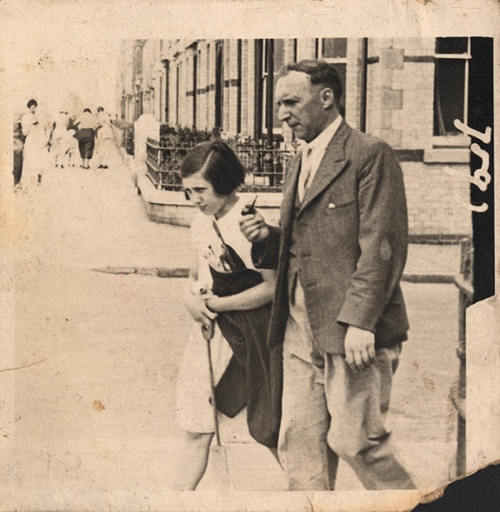 Fiona’s mother (born 1923) and grandfather, circa 1933, probably Rhyl. Several blocks on sea front West Parade match style, but one block has been pulled down on corner of John Street.

EMPIRE FILMS were one of the bigger firms in the trade, and operated via a franchise system, supplying out of the box kits to get started in the business. They were at work in Edinburgh in the mid-1920s and were certainly taking walking pictures in Rhyl during the 1930s. Empire worked with old movie cameras, which turned out three frames printed onto a souvenir postcard. So for 1/6d you could be a film star. Most people cut these up to send to friends, so the strips are hard to find today, but most do have the Empire logo on the back.
The walking picture trade largely ceased during WW2 as materials were hard to come by but it was a popular low-cost occupation for ex-servicemen to get into when they came back home after 1945. This great example shows four friends in Rhyl on VJ Day, August 15th 1945. 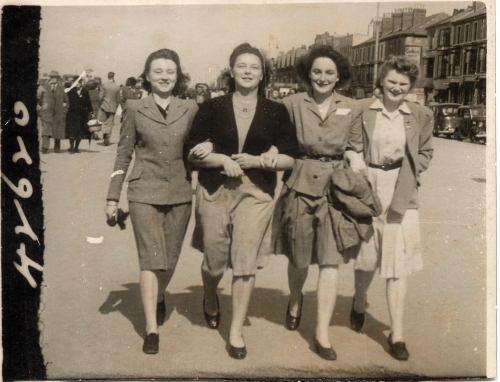 It may have been taken by James Hobson, who having worked for EMPIRE FILMS before the war set up MOVIE SNAPS in 1945, based at 45 West Parade in Rhyl (and also at Aberystwyth Pier). He used a newer type of cine camera and sold the prints as strips. James was quite an entrepreneur and is said to have employed players from Rhyl football team during the week to take the photographs. Certainly it was a trade where many firms provided casual work for local people or students when it got really busy, taking pictures, working in the darkroom or a kiosk.
This example shows two frames still together, and dates from 1947. It’s possible MOVIE SNAPS kept going into the 1960s as cine strips of children on beach donkeys and on the prom in Rhyl have been seen.

The walking picture below from 1960 shows (l-r) Sheila Warburton, Mrs. Joan Peacock (a neighbour and godmother) and mum Gladys Warburton on holiday.

RHYL HOLIDAY SNAPS took walking pictures at the pier entrance, but little is known about them. Some pictures of Rhyl pier do show a walking pictures kiosk not far from the entrance, so maybe this is where they sold their prints (if anybody has an original of this postcard Simon would love a decent scan).

HANDS BROTHERS were based at Westbourne Avenue in the 1940s and pictures of soldiers walking down streets in Rhyl taken by them have been seen.
Other photographers worked in bigger towns and cities year round but decamped to places like Rhyl for the summer season to take walking pictures. SILVERTS for example had a studio in Manchester but took walking pictures in Rhyl in the summer in the early 1960s.
It is unusual for families not to have a few walkies in their old albums and hopefully this has helped explain what these souvenir pictures are all about. Some photographers would take hundreds in a day, thousands in a season, so there are likely to be many more around!
You can read more about the trade on Simon’s website and find out how to submit examples for this growing archive (and a forthcoming book). And do let us know if any members of your family worked in the trade or have any more examples.
https://gohomeonapostcard.wordpress.com/

We have recently received an enquiry about these photographs.  They appear to show some sort of car rally, possibly between 1909 and 1919. Can anyone shed any light on them? The general consensus is that it is Queen Street.  Over to you… 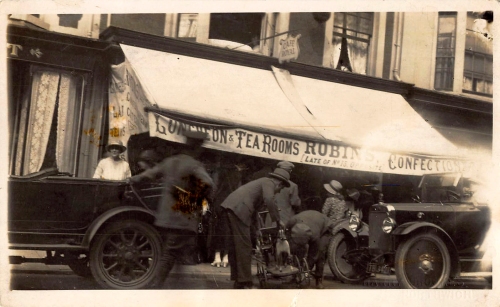 The Liverpool Echo on Wednesday, April 27th 1949 ran an article showing local men who were about to work on the “Special train with Royalty”

“The eight locomen in this picture will be on special duty tonight driving the Royal train, with Princess Elizabeth, the Duke of Edinburgh, the Prime Minister and Mrs Attlee onboard, to a quiet siding near St. Asaph where the Royal party will spend the early hours of tomorrow morning asleep before continuing the journey to Bangor, when Princess Elizabeth and the Duke of Edinburgh begin their two day tour of Caernarvonshire (sic) and Meirionethshire.  The locomen are:
Seated  L-R Driver A.G. Lucas. Fireman F.J. Beech. Driver W.H. Basset.t Fireman Price H. Jones
Standing L-R Driver I. Parsonage. Fireman R.V. Jones. Driver Frank Green. Fireman R.E. Davies”

The letter shown was sent to the each of the locomen to mark the occasion.  Five shillings roughly equated to a day’s pay.

Does anyone know where Llanerch sidings were? Presumably between St. Asaph and Denbigh, but where exactly? 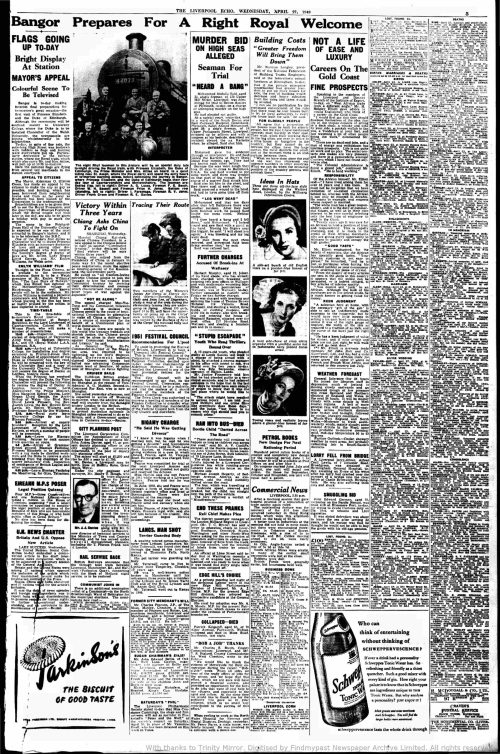 It has been wonderful to see the crowds in Rhyl this Summer – our new hotels, SC2 and other attractions – are all helping to put Rhyl back on the map.
Crowds are nothing new to Rhyl as this postcard, taken in front of the Queen’s Hotel on West Parade, shows. It is particularly poignant as it is dated 1913 – just a year before the outbreak of the First World War when their lives, almost without exception, will have changed forever.

The card was sent to Mary in Mytholmroyd, Yorkshire. Gertie wrote “Can you find G, Dan and I on this p.c. Having a lovely time. Best love, Gertie.”

Rhyl History Club recently welcomed students from Goldsmith’s University (M.A. Design Programme) who are conducting research into town redevelopment focussing specifically on Rhyl. The students visited Rhyl at the end of May and were very interested to learn something of the history of Rhyl from members of our club.  They received a copy of Rhyl History Club’s Digital Archive which will assist them with their project. We all enjoyed our meeting with the students at the “Rainforest Diner” in Rhyl’s new SC2 and we look forward to being of further assistance to them with their project in the future.