Unlike 1999 when Cornwall was the best region to witness the total eclipse, 1927 saw the “path of totality” run across North Wales from Cardigan Bay to Hartlepool.  Rhyl was in the path and people flocked here to witness the phenomenon.  There was an influx of visitors by road and rail, special trains were laid on and motor vehicles packed the promenade and the side streets. 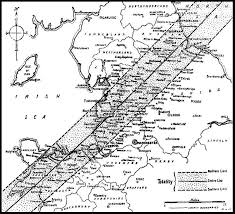 “The total solar eclipse of 1927, June 29th, was the first to be seen on the British mainland for 203 years.  It caused nationwide excitement which included mass population movement to the towns, villages, moorlands and offshore waters of Wales and the North of England, and severely tested the country’s transport and communication systems.”  (R.A. Marriott, Journal of British Astronomical Association, 1999)

A lecture was given by Mr A. A. Buss, F.R.A.S., President of the Manchester Astronomical Society, on the eve of the eclipse, at the Pavilion.  The newspapers of the day were full of information, tips on how to observe the eclipse, travel advice, railway timetables etc.  An interesting pamphlet was widely distributed , which contained an accurate diagram showing the geographical position of Rhyl to be almost in the centre within the line of totality.  The totality phase at Rhyl was expected at six hours twenty three minutes and twenty six seconds a.m.

Magistrates received many applications for license extensions, the headlines in the Rhyl Journal and Advertiser on June 25th read:

RHYL AND THE ECLIPSE

DANCING ALLOWED TILL 4a.m. AND MUSIC TILL 8a.m

After a reasonably dry and mild night, just as it was almost time for the great phenomenon to occur, rain began to fall which developed into a steady downpour.

This is what the Rhyl Journal and Advertiser had to say on July 2nd:

The sun and the moon on Wednesday morning last, June 29th, faithfully kept the appointment they made over two hundred years ago to again meet each other full in the face somewhere in the neighbourhood of the British Isles.  Amongst the places which the astronomers recently let into the secret of this appointment were Rhyl, Prestatyn, Abergele and Colwyn Bay.  But while these places were vying with each other in their efforts to attract as big a crowd as possible for what promised to be the greatest show on earth, the sun and moon were wickedly conspiring with the weather to do North Wales out of the show entirely, with the result that there was a huge disappointment for biggest crowd North Wales has ever known.

“Town Topics” by Townsman, in the same edition, included these insights:

The ceaseless stream of motors flowing into Rhyl during Tuesday night and the morning of the 29th made one wonder where they all came from.  Yes, thousands of them came to Rhyl despite the fact that our town seems to have been ignored by the leading papers of England in writing about the eclipse.  Why, we know not, unless it is that Rhyl does not advertise as much as our neighbouring towns do.  Newspaper people must live, and papers thrive by advertisements and not by sales.

It was a strange sight to see most of the local shops and hotels open nearly all night, and newspapers being sold at 4 a.m on the crowded promenade.  I am informed that many of the shops and hotels never had such a good time.  Through the kindness of the management I was enabled to view the phenomenon from the roof of the pavilion.

About 6 o’clock when the band ceased playing, it became decidedly colder.  We found the hot coffee, so thoughtfully provided for by our chairman, very acceptable.

Perfect silence prevailed.  Some of our city fathers appeared awe-struck, and even our genial town clerk looked very serious.  A young flapper was heard to whisper in frightened tones to a lady friend, “Please don’t leave me”.

So, the weather spoiled the show.  June 1st – August 31st 1927 was the fifth wettest three month period on record with 337.1 mm of rainfall – that is if the Summer of 2012 hasn’t altered those statistics.

Click on the links below to learn more about the eclipse of 1927: